Thomas Cook, the oldest travel agent in the world with 178 years of history, suddenly announces his bankruptcy. The company leaves 21,000 jobs in the air, 9,000 in the United Kingdom. In addition, it leaves around 600,000 tourists, customers, around the world. Not counting all those who had already booked their next vacation with the company.

The English company offered vacation packages and owned a fleet of 105 aircraft and 200 hotels and hotel complexes under its brand. One of Thomas Cook’s key markets was Spain, which a priori will be the most affected country.

The company announced the bankruptcy in the early hours of September 23, after holding meetings of an urgent nature this Sunday in order to get 200 million pounds to try to solve the situation. Many are surprised that the British government did not rescue the company taking into account its dimensions and the amount of jobs that depend on it.

In reality, the company accumulated bad results in recent years, as well as a large debt that only increased. And not getting those 200 million pounds, was forced to break. But what is behind this situation? What consequences will it have?

Thomas Cook started his journey in tourism in 1841, when he organized his first day trip from Leicester to Loughborough on the occasion of an anti-alcohol event (which he considered guilty of the problems of that society). In the beginning it focused on day trips, and it was not until 1845 that it began to organize trips for profit. The first consisted of a trip to Liverpool from Leicester, Nottingham and Derby. For this experience, Cook produced small handbooks that would be the precedents of the tour guide.

In 1865 the company opened its first offices in Fleet-Street, London. A year later he organized his first tour to America, and in 1869 we organized trips to Egypt and Palestine. The company’s first cruise ship set sail to Scandinavian waters in 1875, and in 1896 Thomas Cook & Son is appointed as Official Passenger Agent for the first modern Olympic Games in Athens.

Already in the twentieth century the company continued to grow. In 1922 the company offered the first guided tour around Africa and 5 years later organized its first air trip, between New York and Chicago, to witness the heavyweight boxing match between Dempsey and Tunney.

After World War II the company becomes owned by the british state under the “British Transport Holding Company” to survive. In 1965 it exceeds one million pounds in profits and is privatized in 1972, date on which we could consider its new era to begin today.

The reasons for bankruptcy and some of its consequences

A disastrous merger whose effects have been dragged to the present. In 2007 Thomas Cook merged with the company MyTravel, best known for its trademarks Airtours and Going Places. The objective of this merger was to create a gigantic and leading European tourism company that generated a saving of 75 million pounds per year for the company. The merger was also intended to stand up to new emerging businesses on the internet. What actually happened was that Thomas Cook merged with a company that did not generate profits and that left the British with an important debt behind them.

It may be that the bankruptcy of the flagship of British tourism meant that citizens were traveling less and less, and that the sector was involved in a downward trend. But this is not the case: tourism is only increasing, although trends change. According to The Guardian, 60% of the population of the United Kingdom enjoyed holidays abroad in 2018, 3% more than the previous year.

What happens is that the patterns have changed. Long vacations to beach destinations are no longer so popular. Shorter stays in cities increase in popularity. Who benefits from this but the big tourist companies? It may not be necessary to mention them, but they are companies such as Airbnb, Booking, EasyJet or Ryanair. Because we have to add the internet factor to this. The four companies mentioned above receive all their reservations online, while Thomas Cook had 560 offices dedicated to sales of vacation packages. According to The Guardian, only 1 in 7 people go to physical establishments to book their vacations, and those who do so are generally over 65 years old and belong to low socioeconomic groups. 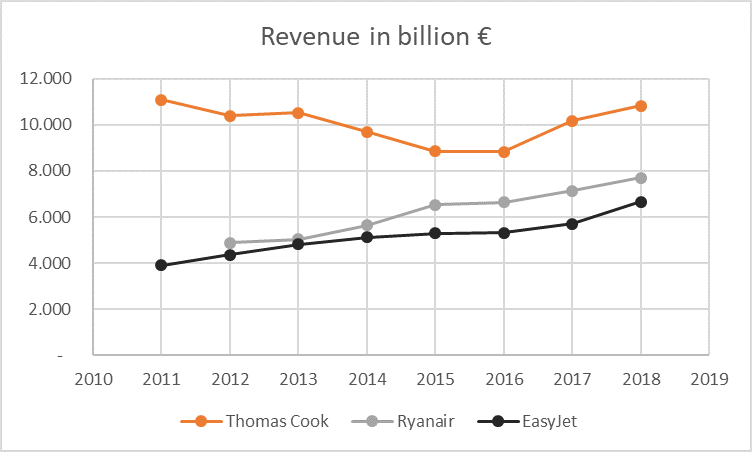 In recent years other factors such as climate change (due to an increase in temperatures in R.U.) or Brexit (due to the devaluation of the pound) have also affected the company. But these are secondary factors.

In 2011, the company almost collapsed, accumulating debts of more than one billion pounds. But he received an urgent injection of capital, which became a major debt. Since 2011, more than a quarter of the company’s sales revenue was destined to remedy the debt.

The last straw was the failed restructuring plan published by the company last August. This plan included, among other things, an injection of 450 million pounds by Fosum, a Chinese shareholder group of Thomas Cook.

The impact of the bankruptcy of the group for the economy is still to be specified, beyond the 21,000 jobs we already mentioned. The debts to the hospitality sector are millionaires, since these payments are usually made within 90 days, and now include the stays of June July and August. With special impact on the Canary Islands and the Balearic Islands. The Islands will also suffer a problem of loss of connectivity, since in the case of the Canary Islands about 20% of foreign tourists were clients of Thomas Cook, which established it as one of the main actors of the air activity of the archipelago. And without the economic effort that countries such as the United Kingdom will have to make to expatriate their citizens and protect the rights of the tour operator.