Do you remember the famous “What is that? It is a bird? It is a plane? No, it’s Superman!”? Well, the next time you see something flying in the Spanish airspace, it is probably not to be a Marvel superhero, but it is very possible that it could be an International Airlines Group (IAG) plane.
The Anglo-Spanish holding company, through Iberia, has reached an agreement with Globalia for the acquisition of Air Europa paying 1,000 million euros with the aim of transforming Madrid airport into an international reference and the leader of the routes to America. Despite the purchase of the Spanish airline, which will be close in the second half of next year, Air Europa will maintain its brand in the market.

Air Europa is one of the main private airlines in Spain. It flights to 69 national and international destinations, including long-distance routes to Latin America, the United States, the Caribbean and North Africa.
Despite the crisis that affects the aviation sector, the company billed in 2018 near 2,100 million euros, obtaining an operating profit of 100 million. In addition, its gross assets at December 31 were 901 million euros, with pre-tax benefits of 67 million. 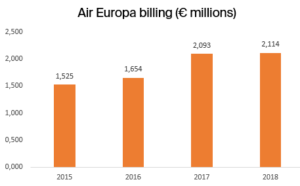 Air Europa finished last year with 11.8 million passengers transported and with a fleet of 66 aircraft, becoming a very attractive airline for the market.
In financial terms, the IAG air holding company foresees that the acquisition, which will be financed with external debt, will generate profits when the first year is completed after the end of the operation, and the return on invested capital (ROI) will increase from the fourth year.
IAG expects that the net debt to EBITDA ratio is going to be 0.3 times higher as a result of the acquisition, from 1.2 recorded at the end of the third quarter of 2019. The IAG price rose 1.3% on the London Stock Exchange a few hours after the announcement.
Nonetheless, both firms will continue to compete until the purchase is made. If the transaction is not completed or the relevant authorizations are not obtained, IAG will have to pay Globalia group airline a compensation of 40 million euros.

Purpose of the operation

IAG group considered that the purchase will help them to be the market leader in flights from Europe to Latin America and the Caribbean.
The main objective of the operation will be to turn Madrid into a key aviation center to compete with the four largest hubs in Europe: Amsterdam, Frankfurt, London and Paris. “The acquisition of Air Europa means adding a new competitive and profitable airline to IAG, making Madrid a leading European center and allowing IAG to achieve the leadership of the South Atlantic, thus generating additional financial value for our shareholders,” said the CEO from IAG, Willie Walsh.
Along the same lines are the statements of Luis Gallego, CEO of Iberia “after this agreement, Madrid may compete with other European hubs on equal terms, with a better position on the routes from Europe to Latin America and the possibility of becoming a gateway between Asia and Latin America. ”
Iberia plans to increase its traffic by 50% (10% in the case of IAG) with the operation, which offers great synergies in terms of costs and revenues and will be at full capacity in 2025.
Among these synergies, which will entail new strategies, it is important to add reciprocal shared codes within the group in all connected gateways, time adjustment to maximize connectivity through the Madrid hub, align commercial policies and integrate sales teams into National markets.
By 2024, IAG expects the absorption of Air Europa provides 12 million more passengers (2.5 million passengers of long distance), 10 new transatlantic destinations and 37 additional aircraft.

One of the biggest consequences of the operation that has altered the first week of November directly affect the Spanish passengers.
As a result of the purchase, the IAG companies (British Ayrways, Vueling, Air Europa, Iberia and Iberia Express) will have more than 50% passenger quota in the Spanish airports of Aena, which will strengthen their market dominance position, just answered by Ryanair. 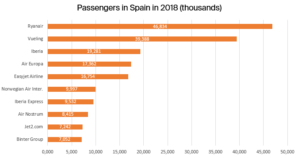 Nowadays, every international or European new must be related to Brexit and how this process can affect companies. Int his case, we must relate the purchase to the impact of Brexit because Air Europa will have the same status as Iberia in relation to Brexit and its Spanish identity.
IB OPCO Holding, a company through which IAG will make the purchase, is the company that already controls Iberia and in which El Corte Inglés has the majority of political rights, an argument that the group has asserted before the community authorities to defend their Spanish identity because of Brexit.
The presence of El Corte Inglés in the capital was used before the Ministry of Development and the European Commission in defense of its Spanish nationality and community DNA to be sure they can flight between EU countries if the United Kingdom executed a hard Brexit.
The group has also used the fact that IAG has its registered office in Spain as an argument to defend its Spanish identity.
Government endorsed on June 20 the Spanish nationality of Iberia and Vueling. Both the Spanish Aviation Safety Agency (AESA) and the Civil Aviation Authority gave their approval to the fulfillment of the community regulations by the two IAG airlines to continue operating in EU skies in case of a hard Brexit.

The purchase operation by Iberia facilitates the merger of Ávoris with Globalia issuers.
Javier Hidalgo, CEO of Globalia, had been looking for a partner for the issuing division of his company in order to reduce the effects of Halcon’s losses in recent years. The sale of tickets for Air Europa was its big benefits and the sale of the airline will cause the need to search for new ways to obtain positive economic results to compensate losses, thus promoting the agreement with Ávoris.
On the other hand, Simón Pedro Barceló, CEO of Ávoris, seeks to focus on his hotel business, leaving aside its issuing division.
The merger of both divisions would create a giant in the travel agency sector whose joint billing could unseat El Corte Inglés as number 1 in the sector in terms of revenue.