The planned merger between T-Mobile and Sprint will have a great impact on the North American wireless communication market, taking into account that between the two, according to Statista, they accumulate around 30% of the market.

Both companies have had to face many obstacles to make the agreement possible, and the Antitrust Division of the United States Department of Justice had not approved the operation so far, which will be executed for a value of more than 26,000 million dollars.

What are the keys to the pact? T-Mobile US and Sprint will be, after the merger, the third largest company in the sector, behind Verizon and AT&T, with a market share of approximately 30%. This could generate important changes in the competitive equilibrium, so the US administration does not see the union of both companies with good eyes.

As in any other merger process, it is important to know the particular circumstances of the companies, to understand better the operation and make a correct reading of what their intentions may be.

T-Mobile is the name used by some of the subsidiaries of the German telecommunications company, since the German conglomerate bought the holding company T-Mobile Interntional AG. The T-Mobile brand is present in several European countries (Czech Republic, the Netherlands and Poland) as well as in the United States.
Deutsche Telekom, in addition to the aforementioned “T-Mobile” brand, owns all or part of a multitude of companies distributed in other European countries. 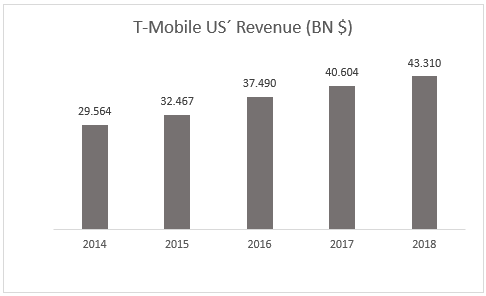 The previous graph shows the company’s income between 2014 and 2018. We can observe a positive trend given by a continued increase in revenue. Between 2014 and 2018 the company increased its revenues in the United States of America by around 46%. So the purchase of Sprint could be motivated by this trend to take advantage of this positive inertia.

Sprint is an American company with activity in the telecommunications sector. It is currently the fourth largest developer of wireless network. It has almost 55 million customers distributed among the United States, the Virgin and Puerto Rico. The company’s headquarters, founded 33 years ago, are located in Overland Park, Kansas. 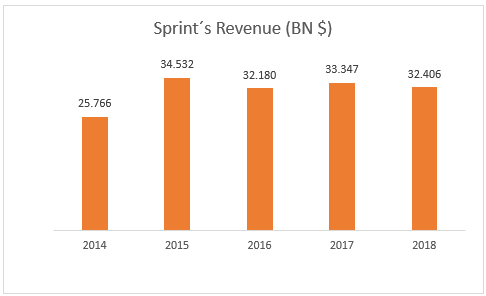 Like T-Mobile, Sprint experienced a strong increase in business between 2014 and 2015. On the other hand, after this exponential increase, the turnover recovered stability after a small drop in revenue.

The telecommunications market in the United States is highly dominated by two companies; AT&T and Verizon. Between both dominate more than 60% of the national market share.

We can see that the American telecommunications market is made up of four major competitors, of which 2 are distributed around 70% of the market.
The billing figures for AT&T and Verzion are far from the T-Mobile and Sprint figures. 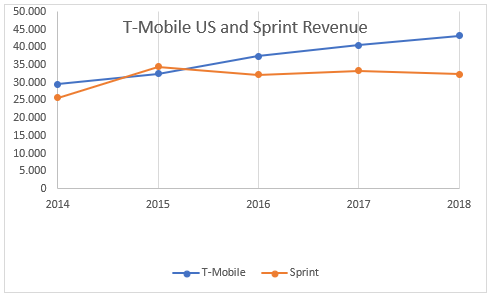 Source: Macrotrends
As we can see the billing of T-Mobile and Sprint would not even reach 100 billion dollars today. Meanwhile AT&T and Verzion billed 170.8 and 130.9 billion euros in 2018 respectively.
The merger of T-Mobile and Sprint would make them much more competitive, with a share of around 30%. The market would no longer have 4 big competitors, if not it would have 3 but in a more even situation.

The merger and its inconvenience

As we have already mentioned, the merger would be carried out through a partial purchase of Sprint by T-Mobile US. The purchase would be made for a value exceeding $ 26,000 million.

But the most striking thing about this case is all the controversy it is generating in the United States. In order for an acquisition or merger of this caliber to be carried out in the United States, it must obtain the approval of the Antitrust Division of the Department of Justice and in this case also of the Federal Communication Commission (FCC).

Due to the characteristics of the market, obtaining approval from these organizations was largely complicated. The US administration believed that if the merger took place it would have bad consequences for consumers due to a significant change in demand. But the biggest concern of the United States government is not that, but, as we mentioned earlier, the number of competitors in the sector would go from four to three.

In order to obtain the approval of the administration, the companies had to carry out a series of requirements, all of them oriented to the appearance of a fourth competitor.

Dish American company founded in 1981 as EchoStar and dedicated to providing satellite television services will be the next competitor in the telecommunications sector. This is because to get the approval of the United States Department of Justice T-Mobile US and Sprint had to sell their prepaid companies, Boost Mobile, Virgin Mobile and Sprint Prepaid, to said satellite television company. In addition to this, as part of a $ 5 billion deal Dish would also buy part of the wireless spectrum of T-Mobile and Sprint. Finally, Dish could sell T-Mobile services under the Dish brand for seven years while the company develops its own 5G network.

Although the agreement between T-Mobile and Sprint already has the approval of the justice department and the FCC, the company will have to respond to the complaint of 13 states, including those in California or New York, which fear that the agreement It can affect consumers, causing price increases as competition decreases.