Philip Morris International (PMI) and Altria, the two giant tobacco manufacturers behimd the Marlboro brand, have revealed that they are in serious conversations about a possible merger. Both separated approximately 11 years ago, when Altria, producer of Marlboro, decided to segregate the national and international business. After the separation, in the golden age of the American tobacco industry, Altria was dedicated to the US market, while PMI would focus its operations on the international market.

There is no doubt about the economic importance of the US tobacco industry, valued at around 900 billion dollars, at a time of historical consumption lows.

The sharp decline in the traditional cigarettes market, contrasts with the emergence of substitutes such as “vapers” or other methods of heating tobacco without burning it. Although in less developed countries this trend is not so common, and could be a key element for the confirmation or not of an agreement between both firms.

Currently, one billion people smoke actively in the world, of which 80% live in countries with a low or medium income per capita, according to The Telegraph. The market value in 2018 was 888 billion dollars, but the trends in some of the most mature markets, where the products of both entities register large market shares, are negative.

The American continent, which includes the United States, the marketing country of the Altria production company, shows the most unfavorable future for the industry, since it has registered negative variations of -8% since 2005. The number of smokers in 2025 is expected to be 110 million, compared to 169 in 2005. In countries such as the United States or Canada there is a high degree of awareness regarding the harm of tobacco, which greatly affects their consumption.

On the other hand, Europe also exponentially reduces its consumption of tobacco. As we have already mentioned, those countries are more developed in economic, as well as social, countries, where the consumption of this substance is most affected. It is expected that in 2025 in Europe there will be about 182 million active smokers, compared to 247 registered in 2005.

Undoubtedly the most important market for the tobacco industry today is Asia, whose data is collected in the Western Pacific and Southeast Asian regions. Both regions remain stable, accumulating a total of 611 million smokers estimated by 2025.

It is possible that when thinking of a merger of two large companies within the same sector, an expanding market with great potential and in a phase prior to their state of maturity comes to mind. In this case we run into the opposite. PMI and Altria are producers of extraordinary magnitude, occupying the top positions among the main tobacco companies worldwide. 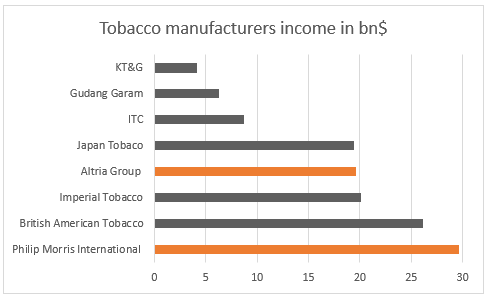 But as we have already mentioned, this is a mature industry, even in decline in some of its key markets. There is no official agreement at the moment, but media such as The Financial Times or The Telegraph confirm formal conversations between the companies near the possible merger: a merger of equals worth 200,000 million dollars.

If they finally merger, the result would be a giant with 50 billion dollars in sales, and a net income of 15 billions. But how possible is this to happen?

As we have mentioned on more than one occasion, the tobacco market is in transition, between its maturity and decline phase, which will cause a reduction in the number of competitors in the near future. To maintain relevance within the sector, and share expenses in innovation for the restructuring of the business and adaptation of the product to new markets, a merger of both producers seems logical. But this is not the only factor that can affect the possible operation.

Although both companies have been one in the past, not all current PMI owners see the advantages of re-entering the US market. According to The Financial Times, based on testimonies from investors and analysts of large financial institutions, some believe it is unnecessary to expose themselves to a market that shrinks over the years, and with fierce competition. In addition, they understand that there are few synergies that could be obtained by merging.

Regarding the adaptation to new products, it is worth mentioning that Altria owns 35% of the Juul company, a young electronic cigarette company valued last year at 38,000 million dollars. But as part of the agreement Altria agreed not to distribute any other steam products. We will see how this affects the merger, since PMI has the Iqos brand, which markets devices similar to cigarettes that heat tobacco instead of burning it and has signed an agreement with Altria for its launch in the United States next month. Although Iqos a priori is an alternative product to Juul, the company will most likely try to renegotiate its agreement.