Netflix, a leading company in the subscription video on-demand (SVoD) market, loses subscribers for the first time in the United States. The company, which expected a growth of 352,000 subscribers in that market, lost 126,000 in 2019 Q”.

The American company offset the losses in its national market with a growth of 2.83 million international subscribers, which were still far from the 4.81 million expected to obtain.

The situation raises doubts among investors: What can be the causes of this loss? Is this an anomaly or really the beginning of a trend for the company?

The prices´ rise in markets such as the US, the United Kingdom, France, Spain, Ireland or Latin America could be behind these figures, as well as the entry into the market of several new competitors. We must remember that the barriers that a user faces to leave such a service, or to restart it, are almost non-existent.

The global economic press, and Netflix itself in its communication to shareholders, list a number of probable reasons to explain the poor recent subscription results:

The market for subscription video on demand (SVoD) is a booming market. In a letter to the shareholders Reed Hastings, CEO of the company explained the following: “The competition to earn a relaxing time for consumers is fierce for companies and very beneficial for consumers… In our most developed market, the United States, we only occupy 10% of the television time of consumers and the percentage is lower if we refer to the screen time on mobile phones, so we have room to grow. ” 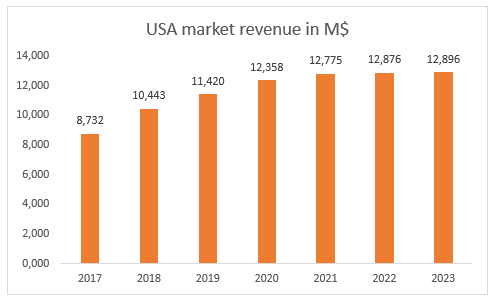 Netflix continues to dominate the market. In the US, a fundamental market for the company, its original content accounts for 68% of the demand in the segment. In addition, the company continues to grow despite having made a price increase in several countries of up to 20%.

Without any doubt, the SVoD market still has a wide margin of growth ahead. That is why this market has attracted the attention of many traditional entertainment companies. Over the remainder of the year and 2020, several companies are expected to launch their own SVoD alternatives instead of relying on third parties such as Netflix.

Although not everyone has revealed the price of their subscriptions, everything indicates that they will try to impose a very aggressive strategy, offering low-cost subscriptions to try to gain market share quickly. Without any doubt, the biggest beneficiary of this situation will be the consumer.

In the aforementioned letter to Netflix shareholders, it was mentioned that “in the next 12 months Disney, Apple, Warnermedia and NBCU, among others, would join the market in which Hulu, Amazon, BBC, Hotstar, Youtube and Netflix already compete among many other companies ”, which will produce an exponential increase in competition.

Although in April we read in Fortune that Netflix welcomed the entry of new competitors such as Apple and Disney into the market, to attract a greater number of consumers, today we see how this increase in agents produces its first headaches. In fact, it has caused an advance in the plans of price increases, to avoid that they coincide with the entry of the new competitors.

One of the most serious consequences that Netflix is ​​suffering from the entry of these competitors is the loss of content for its gallery. The companies producing the content are withdrawing their series and movies From Netflix, as they intend to offer them through their own SVoD platforms. On the other hand, Netflix, which already has important series of its own production like Stranger Things, is exponentially increasing its budget for its own production.

In addition to its direct competitors in the SVoD sector, the company from California has emerged another peculiar competitor. As reported by the New York Post about a week ago the North American Film Chains have decided to stand up to Netflix, how? Well, its strategy has been to implement a monthly subscription system, similar to that of SVoD companies.

AMC Theaters, the largest network in the country already has more than 850,000 subscribers and allows its users to watch up to 3 movies a week for a price of $ 20 per month.