Just Eat and Takeaway.com´s merger is the last chapter of the “Delivery war”, a market that has not stopped growing since these platforms took their first steps at the beginning of the century. At a time when receiving food at the door of the house was a tedious task and with a very limited offer, hungry visionaries such as Jitse Groen, founder of Takeaway.com, thought there should be a simpler way to order food.

Currently the market is booming. It is expected that between 2019 and 2023 active users will go from 971 million to 1,371 million, which represents a growth of more than 41%. And these predictions cause strong tensions among the leaders of this market. The movements of competitors like Uber Eats or Deliveroo have caused two Giants like Just Eat and Takeaway.com to reach an agreement.

Both companies have proposed an exchange of shares, merging into a new firm based in Amsterdam, although it would maintain much of its operations in London and be listed on the stock exchange of that city. Just Eat shareholders will receive 0.09744 shares of Takeaway.com for each company title, resulting in a valuation of 0.31 pounds per share of Just Eat, 15% above its price on July 26 . As a result of the merger, the shareholders of Just Eat would control 52.2% of the resulting company, while the shareholders of Takeaway.com 47.8%.

Both companies have proposed an exchange of shares, merging into a new firm based in Amsterdam, although it would maintain much of its operations in London and be listed on the stock exchange of that city. Just Eat shareholders will receive 0.09744 shares of Takeaway.com for each company title, resulting in a valuation of 0.31 pounds per share of Just Eat, 15% above its price on July 26 . As a result of the merger, the shareholders of Just Eat would control 52.2% of the resulting company, while the shareholders of Takeaway.com 47.8%.

Not so long ago, ordering food at home was exceptional. The offer was usually limited to establishments or fast food chains that had “fleets” or networks of delivery people who were responsible for handling the orders received.

We were far from the current situation, where there are many platforms that act as intermediaries between all kinds of restaurants and customers. Companies like Just Eat, Uber Eats or Deliveroo promise advantages for restaurants, consumers and workers: users can order all kinds of food from their Smartphone; restaurants manage to save the fixed cost of maintaining a fleet of delivery people; and its workers the possibility of flexible work, although these types of companies have always been immersed in conflicts and controversies with the distributors who work for them.

In the early and mid-2000s, when firms such as the Dutch Takeaway.com or the Danish Just Eat took their first steps, all orders were made by phone. In addition, it was much more common to make an order and go to pick up the order personally than to receive it at the door of your house.

With the internet gaining popularity, while personal computers became increasingly accessible, several entrepreneurs thought there had to be another way to order food at home.

As we have already mentioned, the Delivery sector has not stopped growing since its inception. At present, according to Statista, it is a market valued at 107,438 million dollars, with 971.6 million users worldwide.

According to Statista’s “eServices Report 2018”, the country with the highest degree of penetration is China, where the ratio of active users among the total population is around 40%. The Netherlands and the United Kingdom follow in Europe, while in the United States this ratio is around 20%. 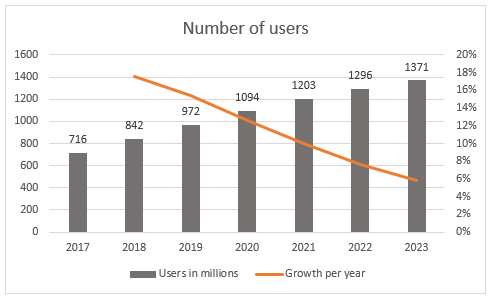 Estimates show a market of 1,371 million users in 2023, with continued growth. Too sweet to not attract the attention of many operators, including Amazon, which has caused a real war to see who is positioned better for the next few years.
In Europe the market was dominated in 2017 by three companies, Just Eat, Deliveroo and Takeaway, in addition to Delivery Hero in fourth place. 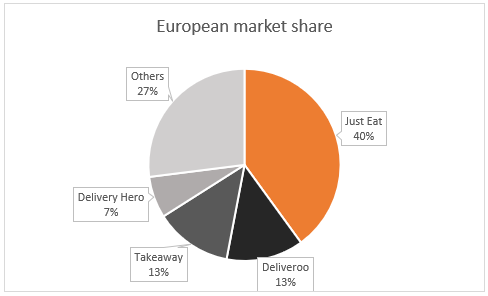 Other competitors, such as Uber Eats, with an important presence in other regions, have entered the market with very aggressive positioning and quota strategies.
The latest movements in the market, prior to the merger of Takeaway.com and Just Eat were:

The outcome, as we have anticipated, is the merger between Takeaway and Just Eat, as a tactic for the Dutch to defend themselves against new competitors. It has always been said: “the best defense is a good attack”, so the Dutch try to eat the European market.
As background we have the acquisition of Delivery Hero, a German group for which at the beginning of the year it disbursed 508 million euros in cash and 422 million in shares. This company had moved the previous year a gross merchandise value of 462 million euros, less than half of the investment made by Takeaway. According to J. Groen, they made this investment because of their confidence that the German home-based food market will grow exponentially.
The agreement for the merger of both companies is not closed, but they ensure that the talks are in an advanced state.
Takeaway.com has until August 24 to submit a firm offer or withdraw.