Single’s Day or Guanggun Jie is a special date in China to celebrate the pride of being single. It is celebrated on November 11 of each year, and the date (11/11) was chosen because of the fact that the number 1 represents a single person, and people would raise it to the maximum: 11.11.

Recently, the party has become one of the main days of online sales in the world. Last year, Alibaba pulverized all records, selling for 30,802 million dollars.

Where did the party begin?

It was originated at the University of Nanjing in 1993. Initially, it was dedicated exclusively to men, being a popular event in Chinese universities during the 1990s.

The date serves for socialization among singles, with events such as blind dates for people to leave the single life. In 2011 the “Singles Day of the Century” (11/11/11) was celebrated with several promotional activities related to the event, aimed mainly at attracting young consumers.

On December 28, 2012 Alibaba Group registered the term (double 11), being one of the main online sales portals, along with its other websites Tmall and Taobao.

In countries such as Spain or the rest of Europe, the vast majority of Single´s Day offers come from AliExpress, the international version with which the Alibaba group works in other countries. In our country, Aliexpress opened its first store last August, at the Madrid Xanadú shopping center, with an omnichannel store concept: online shopping union with the experience of being in a physical store.

But other businesses have also joined this 11.11. El Corte Inglés, for example, has launched 1,111 offers on Monday in all sales areas.

How did it become such an important consumption day?

The initial objective was to see from a positive perspective the fact of not having a partner. Due to the strict birth control that the Asian nation has been living for some years, as a measure to avoid overpopulation, people of marriage age are increasingly scarce.

Therefore, the pressure that men and women have, due to find a partner with whom to marry, is increasing. It is estimated that currently in China there are about 20 million singles who live at risk of never finding a partner, doing so at an age when getting married would not be well seen or in which the possibility of having children would be complicated.

Taking it into account, the University of Nanjing devised a project that would make people see that singleness is not a bad thing, but that it has great advantages and should be enjoyed.

As the same case that it happened with other dates, such as the Day of Love and Friendship, the Day of the Single gradually became a celebration focused on consumerism. Public figures such as the actress Nicole Kidman, the tennis player Maria Sharapova or the former soccer player David Beckham have participated in advertising campaigns of well-known fashion brands to promote offers on this day that moves huge quantities of money.

Since several years, part of Christmas, in terms of consumption, has moved to the month of November. In this way, consumers can take advantage of the offers offered by the two giants of online sales on single day and Black Friday. Amazon versus Alibaba.

The great dominance that the group of Jack Ma has in the Asian market and being the first to exploit the Single’s Day offers, has allowed it to take an extremely privileged position in which no other company of the competition can face it in the sales of this day.

The difference compared to Black Friday is that it has very different components, since it has an emotional component, because these are more self-oriented purchases, on a whim. It is more an impulse purchase.

The buyer’s profile is also different: younger and looking for a treat. That concept of the single is something that is little used in advertising and that Alibaba has managed to exploit offering special products for own and individual use.

Although the rest of the online sales platforms have joined the day, as well as thousands of physical stores, Alibaba is the main promoter of the festival, which emerged in 2009 with the participation of 27 stores. It is a big celebration, with a previous televised gala in which artists and celebrities encourage people to buy. The show last Sunday, which ended with a countdown to mark the start of shopping, was held in the city of Shanghai and featured performances by artists such as the American singer Taylor Swift among others.

The Single’s day in figures

According to the latest published quarterly results of the Alibaba Group, at the beginning of November the annual active consumers in China reached 693 million, 15.3% more than a year earlier.

The turnover of the group on November 11 of each year has been growing exponentially in recent times because of that special date, thanks to the fact that this celebration is being present in more parts of the world. 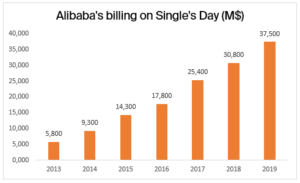 To compare the magnitude of the number of sales that are reached each year on Single’s Day, they are 2.5 times larger than the total of Black Friday and Cyber ​​Monday together, the days on which U.S. businesses launch their offers. Although most purchases are made in China, there are also international transactions since the company is present in other countries thanks to its AliExpress platform.